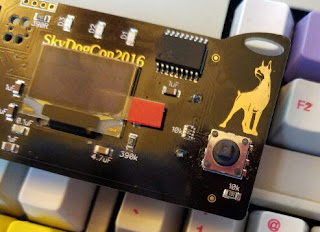 The attendee badges are red this year but the badge you want to earn of course is the black badge.

Not only do you get free access to the con for life but it's also gold plated in all the right places.

There's a sweet little OLED screen which you've seen before in 2013, the joystick that nearly killed me and a few other odds and ends.

Those are three single-colour LEDs.  Knowing how much we like the bling and blinkies should give you a clue that we sacrificed the blinding LEDs for something else more interesting.  Dare I say, more practical?  Certainly more fun.

What's on the left of the badge?

What we sacrificed the blinkies for.  Worth it.

So, you going to be building badges at the con again this year?

For those not familiar with 2013, we built a badge.  An awesome badge.  A badge that we were deliriously happy with only to get delivered by our fabricator half-baked.  Quite literally half-baked; they hadn't baked the boards long enough so components were falling off boards.

Many heroic volunteers that year put in massive hours to get badges to attendees.

This year I'm building the badges by hand because I have trust issues.  Really, I built a robot to build most of the badge but I'm still having to do some of the assembly by hand like attaching the OLED display, SecretIC, joystick and battery pack.  This badge is assembled with lurve.

I intend to relax during the con.

If I want to hack the badge, what should I bring?

Yourself and maybe some AA batteries.  You're probably not going to want to hack the hardware this year for reasons that will be apparent later.

Okay, so software?  What processor / language are you going to use? 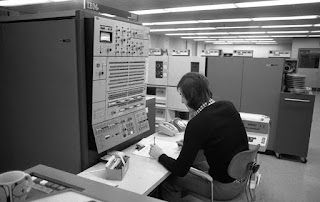 Bring your language and a host to show me it working on and I'll help you to get it to run on the badge.

We do however ask for advance notice if you do choose APL and bring an IBM 360/50 to run your APL code.

Write in whatever language you're comfortable in or learn a new one for kicks... maybe this is the fun excuse you needed to learn LISP?

We wanted to see a badge that people could have fun with and was accessible to anyone without being forced to crash-learn a new embedded processor, language and its idiosyncrasies.


Speaking of accessible, rock it out and we'll get your code running on all the badges...

After all, this is meant to be fun right?